How do I identify bots in PUBG Mobile?

1.Just because of the aforementioned property, you can stand in front of them, reload your DP-28, have an energy drink followed by a painkiller and even then you can stab a bot barehanded!
2.They’ll use ARs and SMGs in single fire mode.
3.80% chances are there that looting a bot will satisfy your hunger of loot.
4.They’ll never kill you unless you let your guard down. But if you messed badly at that point , you’ll be ashamed of your gaming style. XD
5.They’ll never hide around some bushes or trees.
6.They’ll lie down on the ground if they can’t figure out who’s firing them.
7.They can’t fire you from a long range.
8.They’ll never put on ghillie suit.
9.They’ll never use throwables like grenades.
10.Some bots have a horse or other animal mask. 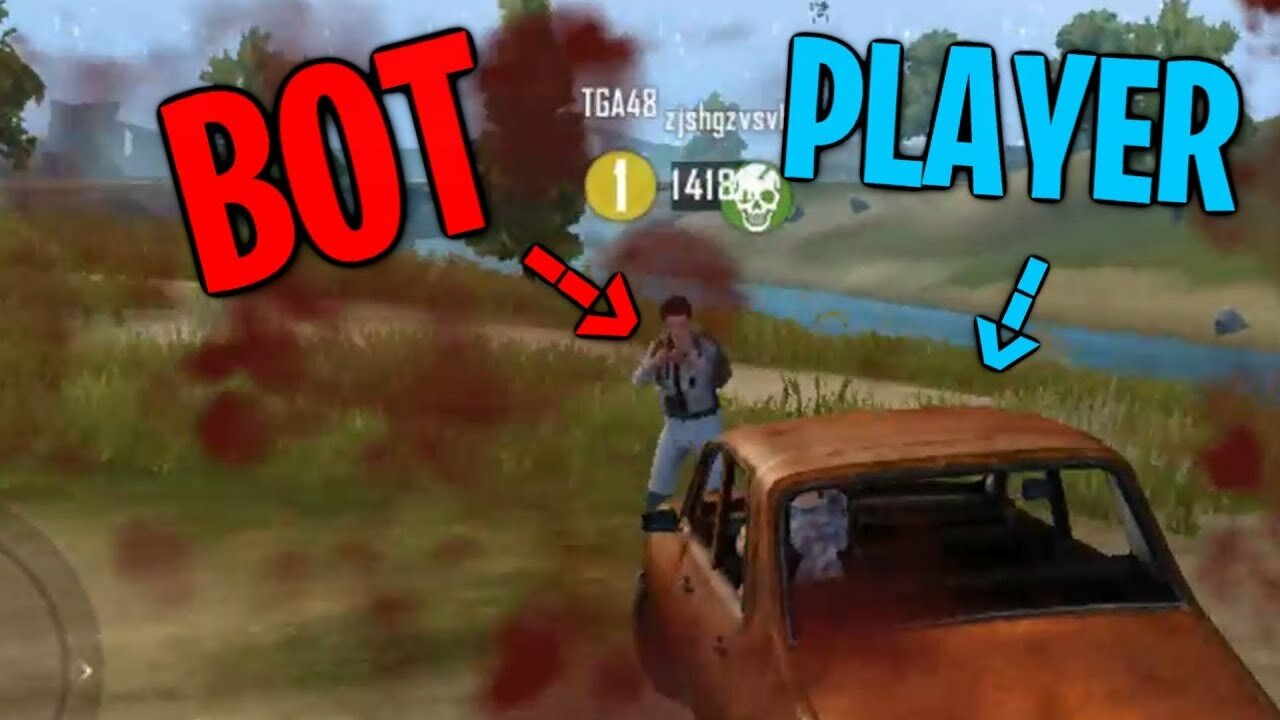 What is bot, and why they are in battle royale games?

A “bot” is an AI, Computer Controlled Player/Character in the Game.
A bot would never loot or go inside a building. Bots are programmed to only shoot at a nearby enemy who would be in a distance of 100ms. Bots don’t have team/squad. So like they shoot at every other character they find in the game.
One easy way to find if a character is a bit is that of you shoot from far or from a distance over 50m, the character would not backfire but go prone for hiding or run in a constant direction. Also the bots won’t shoot you if are not very close, it would run to you after discovering you and would shoot only if it has a clear sight.
Bots don’t use suppressors or scopes. Most do the bots gets automatic guns like Tommy-Gun, UMP9 etc.
Also the bots who make it to the top 10 in a squat match or any other one. They go prone to hide and would only emerge if another player is anywhere near them (radius – 10m) so well don’t wait with ur squad in a building hoping for a player to come to you and with the new updates the Bot AI has been improved and hence most of the statements stated here might not be true now

Well have you ever noticed the moment you tap START the match begins generally within 10–20 seconds or sometimes instantly? What do you think there are 100 players just like you who have hit the START button at the exact same time you did? No. The game tries to group all the people who have pressed the START button within one minute of you pressing it into one game – your game.

However there are times when gathering 100 such people is not possible sometimes gathering even 10 is difficult. Lets say the game finds 50 people like you playing at the same time. But we need 100 right otherwise the game would become dull and you wouldn’t find anyone to kill. Here comes BOTS!

BOTS are computer controlled players that obviously do not contain the skillset of human beings for fighting and other stuff. They are just there to fill the other 50 players in our example.

How to spot them?

Well have you ever heard your teammates or others saying hey, see its a bot! Well how did they get to know within a second its a bot! Well the characteristics of a bot are as follows –

1.They almost never run: they will always walk at a constant speed with short pauses with their weapon always pointed in the air in any direction. Whixh means if you see player walking right into a wall like a dumbass, its a bot!

2.Since they walk with short pauses if you are there in a building you can easily identify the sound of their footsteps which will be audible for 3 seconds then silent for 2 then again for three.

3.Their aim is bad. Like really bad. You can stand dead in their tracks and they won’t be able to kill you. However, don’t actually stand still in front of a bot even if you are damn sure its a bot because as you know the probability of even a blind person hitting a target is more than zero😂.

4.Bots will generally wear fun clothes like clowns and fancy costume but this is just my observation not a thumb rule.

5.Lastly bots never pick up weapons and again in my personal experience bots can provide good loot if killed in start of the match.

Admin - 2nd April 2020
0
PUBG MOBILE recently added new CARLO CHARACTER" ,So we are here to discuss how to participate in this event and and how To get Carlo character for Free

Admin - 2nd April 2020
0
In this article we have emotes for free download in PUBG Mobile , this trick is latest and you will find only on our website you just have to download emotes file from our website and use them in your PUBG ID ,Latest updates in PUBG allow to download emotes which we are giving you for free please comment below if you have any issue regarding our trick

Admin - 29th March 2020
0
IN THIS ARTICLE, WE HAVE NEW CODES FOR YOU TO REDEEM FOR V-BUCKS IN BATTLE ROYALE FORTNITE , WE UPDATE NEW CODE ON DAILY BASES AND IF CODES ARE WORKING FOR YOU PLEASE COMMENT BELOW IN POST TO SHOW SOME LOVE YOU WILL GET LATEST CODES DAILY SO BOOKMARK OUR WEBSITE AND WAIT FOR US TO UPLOAD NEW CODES DAILY , WE HAVE LOTS OF CODES WHICH ARE NOT YET POSTED BUT YOU CAN DOWNLOAD BY CLICKING ON DOWNLOAD BUTTON BELOW

How to get free season 12 Royal pass in pubg mobile...

PUBG Reconnect 3K: What is the Error and How to Fix